All countries are curious about the effects of the stars and planets.

Jyotisha is the Science of Light. Light is spirit. It involves the tracking and predicting the movements of astronomical bodies.

Jyotisha is one of the six Vendagas:
Shiksha This is the Science of phonetics, phonology, and It is a discipline focused on the letters of the Sanskrit alphabet. Of the utmost importance is accent, quantity, stress, melody and rules of the euphonious combination of words during Vedic recitation.

Vyakarana The analysis of grammar and linguistic analysis having to do with the rules of grammar in order to establish the exact form of words and sentences to properly express ideas.
Nirukta The etymology and explanation of words, particularly those that are archaic and have ancient uses with unclear meaning.

Kalpa These are ritual instructions of standardizing procedures for Vedic rituals and rites of passage associated with major life events such as birth, wedding and death in family, as well as discussing the personal conduct and proper duties of an individual in different stages of life.

Jyotisha The mathematical determining of auspicious time for rituals, and the practice of Astrology and astronomy particularly having to do with time keeping. 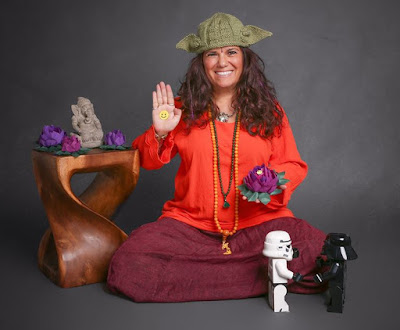 Posted by Ambika Devi at 4:52 PM No comments:

This morning I was inspired!
Enjoy and share in the groovy vibes!

Posted by Ambika Devi at 3:42 PM No comments: